What the Use of ‘I’ Says About You

People who avoid using the pronoun I fall into two broad categories, according to a recent book on the subject: The first group is the high and mighty, and the second is comprised of liars. (Okay, okay, if you’re cynical like I am, right now you’re thinking, “What’s the difference?”) 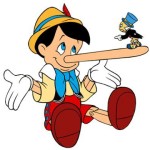 So, to puncture popular misconceptions, using I is actually a good thing. Studies indicate that heavy I users include “women (who are typically more reflective than men), people who are more at ease with personal topics, younger people, caring people as well as anxious and depressed people,” according to an article (“A Tiny Pronoun Says a Lot About You“) in today’s Wall Street Journal.

According to James W. Pennebaker, chair of the psychology department at the University of Texas and author of The Secret Life of Pronouns on which the article is based, the use of the pronoun I is associated more with humility than it is with power or arrogance. Thus people in power will tend to use the pronoun you more often because they feel empowered to tell others what they need to do. Liars avoid I to distance themselves from what they’re covering up — and from responsibility.

Pennebaker advises:  “You should use ‘I’ the same way you use a speedometer on your car — as feedback on yourself. Are you being genuine [by openly referring to yourself in speech]? Are you being honest? Learn to adjust some, to know yourself.”

Now, about those liars and high-flyers, are they built of the same mold? No official word on that in the article. ♦