It’s rare that I come across someone in life who knows how to correctly form a conditional “if” clause. You often hear, “If I was rich (or fill in the blank),” uttered without a clue to the grammatical mistake they just made. 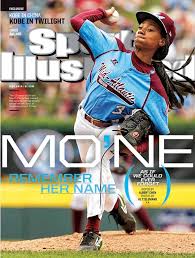 Conditional “if” clauses always take the plural form. (I know, some jackass out there will find some web reference disputing this, but he, she, it and they will be wrong.)

Thay’s why, tonight while I was watching the “KIDSCAST” of the Little League World Series Hawaii-vs.-Virginia game, I was surprised to hear Mo’ne Davis — the designated ESPN “analyst” — say, “If I were they,”  using the conditional perfectly.

I say “surprised” only because I hear people in all walks of life — high, low, medium — butcher the conditional so regularly. Most people would probably have quipped, “If I was them,” or inching closer to correct usage, “If I were them.” The problem is them. Was/were is not an action verb and doesn’t take the objective (them) but retains the subjective usage (they).

Anyway, Mo’ne Davis is an impressive young woman, now five years removed from the same Little League World Series that made her famous and moved Sports Illustrated to dump Kobe Bryant off its cover in favor of the 13-year-old pitcher.

In an interview, she said she’s going to study communications at Hampton University in Virginia (home to the losing team tonight) and then hopes to become a broadcaster with her own show called “Moments.”

In her work tonight with the Little League game, she betrayed too many “ums” and probably needs to gin up some effervescence, but otherwise she seems headed for stardom.