There’s No ‘Jerry’ in ‘Gerrymander’ (Try ‘Gary’ Instead)

END_OF_DOCUMENT_TOKEN_TO_BE_REPLACED

The Wisdom of Paris Hilton 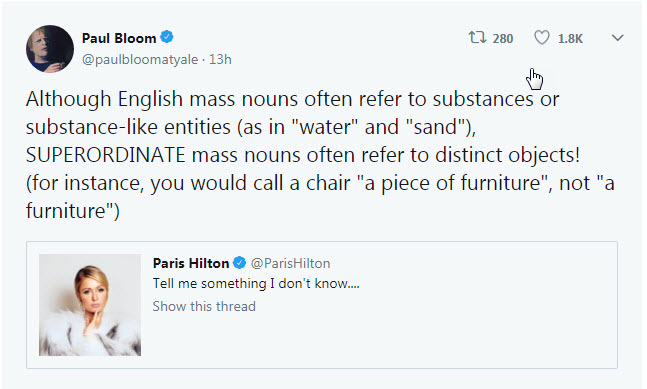 We’re all waiting for Monday to arrive to see what transpires in Singapore in a dramatic upcoming summit between North Korea and the U.S., right?

Wrong. We’re waiting for the owners of the International House of Pancakes (IHOP, an abbreviation well known for 60 years) to tell us what the b in its new acronym IHOb means.

Questions abound: As for the meaning of the b, some have said breakfast, others burgers. I’m setting on bullshit (bs, or b for short).

Also, why is the b lower case and IHO upper case?

What a grand way to ruin a brand.

Anyway, I guess I have to call in sick Monday to await with bated breath what the b stands for.

POSTSCRIPT: Now that Monday is here, we all know (if we care to know) that the name change is only temporary so the company can promote its new line of “Ultimate Steakburgers.”

I had ESPN on as a prelude to the NBA Finals, featuring the highly favored Golden State Warriors against the undermanned-except-Lebron-James Cleveland Cavaliers in what will probably be a snorer, when all of a sudden the National Spelling Bee came on.

First off, I was impressed by the sheer verbal genius of these kids (teenagers for the most part in the latter rounds), and second, by the sheer number of South Asian natives — whose Queen’s English seems to serve them admirably.

I was even more impressed when the 2015 Co-Champion, Vanya Shivashankar, now 16 maybe, did a roving interview asking luckless people on the street if they could spell the word by which she co-won — to wit, scherenschnitte, whatever that means. Looks German anyway.

Ms. Shivashankar, who seems to be a natural for TV and probably every other pursuit in life, concluded that a dog she asked for the spelling came the closest.

I agree. My dogs are always smarter than I am. Which probably ain’t saying much.

You go, Vanya. Set the world on fire.

During a meeting at work this morning, I was trying to describe a situation wherein a bad task that I had shaken off after years was returning to my job duties. In describing this, I was searching for an old saying I remembered from my youth about a “bad penny,” but it escaped me.

So, now at home, I researched the saying:

Basically, “Turning up like a bad penny” refers to someone — or in my case something — unwelcome returning to one’s life after a long absence. If a person, it could be someone who harmed you or took advantage of you in the past, or even a former lover in a relationship gone much too sour; if a thing, it could be old debts, old unpleasant situations, or in my case more specifically, old hated job duties.

Here is the best description I found:

…when the term ‘bad penny’ first appeared in the 18th century, pennies were serious money. This made them ripe targets for counterfeiters, and to reach into your pocket or purse and discover that you had ended up with such a counterfeit coin, a ‘bad’ penny, was a depressing and annoying experience…. Thus ‘bad penny’ became an idiom meaning ‘an unwanted thing that keeps showing up’.

When I watch television, especially the live sort where so-called educated people mangle the language daily, I find myself correcting people as they speak.

For instance, if someone says, “If I was you,” I correct it in my mind to “If I were you,” using the proper plural (conditional) form of the verb.

It was interesting to see such correcting done on a TV series, the tongue-in-cheek (so to speak) “Silicon Valley,” which aired Sunday (April 29).

When Dinesh said something like, “My code had less errors than yours,” Gilfoyle corrected him, saying, “Fewer.” (Later, of course, in a reverse, Gilfoyle would use “less” incorrectly too.)

Look at up: Fewer refers to quantity, or number; less to weight or volume.

Now, if I was Dinesh…

Why Do We Need Daylight Saving Time?

I heard that Florida legislators recently voted to make Daylight Saving Time permanent. I say hallelujah. Let’s all do that.

If you think about it, the best crops are all now grown indoors anyway.

Commas Do Matter, at Least in Court

Now in modern American English, use of the Oxford Comma has been denigrated, meaning that it’s optional in most cases. I personally tend to eliminate it unless doing so would render the sentence harder to understand.

A dairy in Maine will now have to pay $5 million in back overtime wages because of a missing Oxford Comma in a state law, which stipulates that workers are exempt from overtime when in the process of “…marketing, storing, packing for shipment or distribution of” products.

END_OF_DOCUMENT_TOKEN_TO_BE_REPLACED

Peoplekind, Unite — You Have Nothing to Lose Except Your Gender

Canada, which this year purged its national anthem to make it gender-less, is now leading the charge toward political correctness.

You may have seen the video in which Prime Minister Justin Trudeau corrects a young woman who uses the word “mankind” and advises her to use “peoplekind” instead “’cause it’s more inclusive.”

The woman — and the audience — agreed with smiles and cheers.

When his own nation turned on him for the comment, a week later Trudeau said it was all “a dumb joke.”

“Dumb” I agree with, and “joke” seems to apply to the office of the current prime minister of Canada.